A$AP Rocky says he’s disappointed in Sweden’s verdict, but he is moving forward. Hours after the verdict for the 30-year-old rapper was released, he took to social media reacting to the news. He writes:

I AM OF COURSE DISAPPOINTED BY TODAY’S VERDICT. I WANT TO SAY THANKS AGAIN TO ALL OF MY FANS, FRIENDS, AND EVERYONE WHO SHOWED ME LOVE DURING THIS DIFFICULT TIME. IMMA KEEP MOVING FORWARD. THANK YOU TO MY TEAM, MY MANAGEMENT, ATTORNEYS, LABEL AND EVERYONE WHO ADVOCATED FOR JUSTICE. 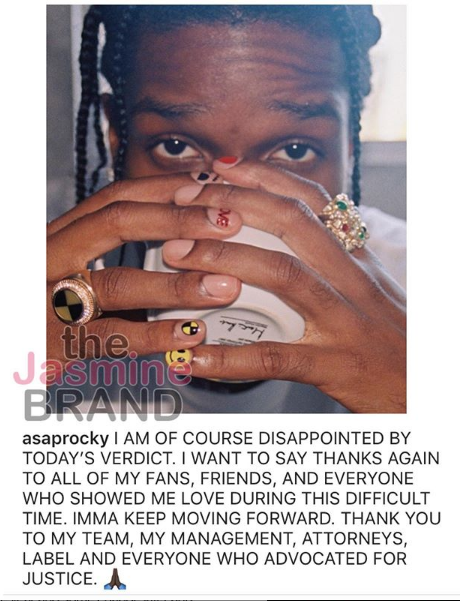 In July 2019, ASAP was arrested initially for aggravated, then for simple assault in Stockholm, Sweden, after an altercation in the street that involved him and his entourage on June 30.

The alleged victim was beaten, kicked, and cut with broken bottles when down on the ground. He suffered several cuts requiring stitches and a fractured rib. He uploaded two videos of the incident to Instagram. In the first, he and his retinue repeatedly ask two young men including Jafari, to stop following them as the latter complains about his headphones.In the other, created from footage of assorted events, Jafari’s headphones break during a scuffle, he is seen hitting ASAP’s bodyguard with them, and a woman is seen accusing the two men of groping.

Surveliance video from the hamburger restaurant show the initial contact where the bodyguard attacked Jafari. Henrik Olsson Lilja, the defense attorney for ASAP, maintained that his client acted in self-defense after being attacked by Jafari.

He was found guilty, but will not have to spend time in jail. Rocky’s co-defendants, Bladimir Emilio Corniel and David Tyrone Rispers, received the same verdict and sentence. All three also were ordered to pay Mr. Jafari damages. In the trial, Mr. Jafari’s lawyer asked for about $16,000 in compensation, but the court awarded 12,500 Swedish kronor, about $1,300, for pain, insult and injuries.

The post A$AP Rocky Is Disappointed In Sweden’s Verdict appeared first on theJasmineBRAND.